In a spontaneous decision, and in a rash of inspiration/desire to look like Marion Cotillard, I chopped off my hair. I donated a ponytail of rough-looking curls and got this, my shortest hair since I was six or seven years old: 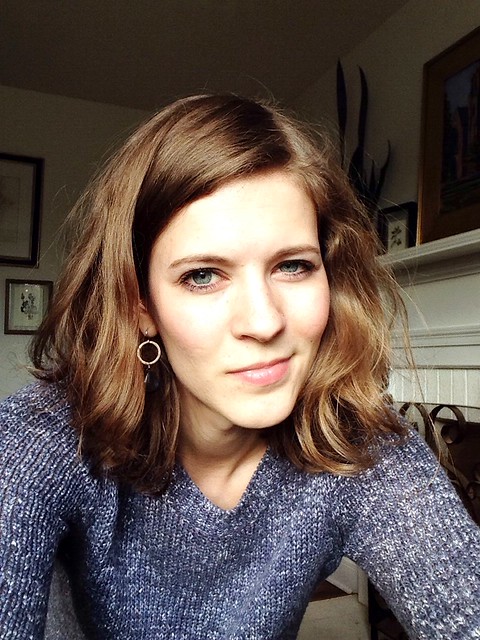 I turn 27 next week, and I feel like it was time I had a grown-up haircut. We’ll see how it wears; at the moment, I feel very unlike myself and brimming with possibility.

My delightful husband, who knows me so well, found the perfect little book for me at the library’s annual book sale: A Joy of Gardening, by Vita Sackville-West (most known to me for being Virginia Woolf’s lover and the model for Orlando).

Sackville-West was apparently one of England’s most beloved gardening columnists, and this book is a free and lovely collection of her thoughts about gardening, tempering plants to the seasons, and favorite varieties. The edition Guion found me was printed in the United States in the early 1950s and has all of these beautiful woodcut illustrations of plants sprinkled throughout the brief chapters.

Her gardens at Sissinghurst Castle were renowned in England and are still prized today.

She has a dazzling, dramatic style, characteristic of her Bloomsbury peers. For instance, some of her thoughts about irises:

There is a race of little irises, flowering in spring, and too seldom grown. They do not aspire to make a great splash; their colors are frail; they grow only to six to twelve inches high; they demand a small place to match their small size; they must be regarded as intimate flowers, to be peered into and protected from the vulgar slug.

I love it. The vulgar slug! It is just the kind of book I love: beautifully written, enthusiastic about a specific topic in such a way that you can’t help but be drawn in.

My irises, which were given to me by a mystery benefactor, hail from Thomas Jefferson’s line of irises in his Monticello gardens. (The irises in these photos were from our last house, a rental that benefited from a landlord with an accomplished green thumb.) Here, at our new home, I planted my mystery-gift irises in the fall and watched over them tenderly throughout dark, cold seasons. They seem to have admirably survived the winter, and I am looking forward to their blooms; I haven’t the slightest idea what they might look like.

Women have very little idea of how much men hate them.  — Germaine Greer, The Female Eunuch (1970)

After this week, however, I’d posit that women have at least a subtle, perhaps subconscious idea of how much men hate them. Over the past few days, I’ve been surrounded by these astonishing examples of self-directed misogyny, or, women who hate women.

Exhibit 1: Editing an article at work about the effect of hormones on traders’ decisions, on how research indicates that testosterone spikes influence traders to make riskier decisions about their portfolios. The article suggests, without the slightest hint of sarcasm, that it would be a good idea if firms chose to hire “unattractive women” or put “pretty women behind screens” on the trading floor, to prevent men from experiencing testosterone spikes. (Behind screens! That was the actual advice.) The piece went on to say that “married men and men over the age of 30” probably wouldn’t be affected by having women on the floor, though. What bold sexism! What idiocy on so many levels! The article was written by a woman.

Exhibit 2: Editing another article at work, a summary of an Economist blog post, which argues that women don’t get promotions at work because women are too nice and care too much about their families (not showing themselves to be as devoted to their work), unlike men (who are apparently heartless robots). Summary was written by a woman.

Sadly, I see this phenomenon all the time; this week it just seems to be more apparent than normal. You probably do, too. Women love to denigrate their entire sex, particularly if they are in the company of men. We all know women who like to brag that they “just don’t like other women,” that all of their best friends are guys.

Why Does This Happen?

So, where is this coming from? Why would women deliberately present themselves as misogynistic? I think it goes back to the oft-quoted line from Greer. Women sense how much men hate them.

We want men to like us. We have this blinding desire to be validated by men, because we’ve been taught all our lives that we aren’t worth anything unless a man tells us we are.

If you think this isn’t really a phenomenon, I’d encourage you to look around a little bit. You’ll find it; it’s not hard. Misogyny is very alive and well, and women, in many ways, are helping feed that destructive fire. Sexism, primarily hatred against women, runs virtually unchecked in our culture. (Just spend a few minutes reading the mountain of posts on the Twitter feed Everyday Sexism. Or flipping through a magazine. Or watching TV. Or trying to cross the Belmont bridge.)

Women, let’s quit abusing ourselves to appeal to men. We’re only fueling their hatred.

There is the pervasive assumption that “men are just animals” and they can’t change, so women need to hide themselves behind screens and never walk alone anywhere, ever. Men are ruled by testosterone and rage and virility! Men cannot control themselves!

But here’s the thing. The men I know and love CAN control themselves. They don’t run around on their lunch breaks verbally harassing women on the streets. They don’t make lewd comments to their female coworkers. They have never (and will never) beat or raped women. It’s equally offensive to men to assume that they are purely lustful beasts, devoid of human reason. Stop shrugging your shoulders and saying, “Well, that’s just the way men are.” It’s not.

Let’s raise our expectations for men in this culture. Let’s believe that they have the potential, the reason, and the souls to be more than just testosterone-crazed fiends who see all women as sex objects to dominate. Let’s educate our sons to view and treat girls and women with full and deserved respect. And women, let’s stop abusing ourselves to pander to our misogynistic culture. I am SICK of it. Just sick.

Unreachable father, when we were first
exiled from heaven, you made
a replica, a place in one sense
different from heaven, being
designed to teach a lesson: otherwise
the same–beauty on either side, beauty
without alternative– Except
we didn’t know what was the lesson. Left alone,
we exhausted each other. Years
of darkness followed; we took turns
working the garden, the first tears
filling our eyes as earth
misted with petals, some
dark red, some flesh colored–
We never thought of you
whom we were learning to worship.
We merely knew it wasn’t human nature to love
only what returns love.

Get it, Louise Glück. Happy weekend, y’all. I’ll be spending mine clinging to Guion, begging him not to leave me for 10 whole days, since he’s taking off with Nettles and The Hill and Wood and Camp Christopher (hint: all the same people) to play SXSW! I’m SUPER excited for them, but I’d like to raise this point: Wouldn’t this absence be easier to bear if I had a dog to keep me company? Wouldn’t it?? Le sigh. These days, I feel like June is a year away and I am going to die dog-less.