My Gran, my Dad’s mom, passed away this morning.

Gran was constantly laughing. Even after her stroke a year ago robbed her of speech, she kept laughing. It was the kind of bright, infectious laugh that lit up a room, that made everyone want to remain in close proximity to her.

She loved NASCAR, motorcycles, dobermans, dogs of all kinds (more than people, for the most part), dental hygiene, painting, the beach, her convertible, and interior design, among other things.

I liked to call her the “patron saint of painting.” She painted almost every surface in her beloved cottage in Grand Rapids (even once attempting to paint the carpet).

The last conversation we had, just about a week before her stroke, we had just moved into our home and she called me to check in. We talked about her coming to visit us in the spring, as she had never been to Charlottesville before. She asked me what we had been working on, and I told her that we’d painted the fireplace and the surrounding ceramic tile white. “What kind of paint did you use for the tile?” I told her that we used an oil-based paint. “Oh, honey,” she said, “I love you, but that was the wrong thing.” She laughed for a bit. “I painted tile in my kitchen with that kind of paint, and it started chipping a week later.”

Sure enough, a week later, after we learned about her devastating stroke, the paint started to chip in front of the fireplace, revealing the old red tile underneath.

It is hard to convey in words how endlessly FUN she was. I don’t think anyone has had a grandmother as hilarious. Spending time with her was always like hanging out with this really cool woman who happened to be related to you, and so you were always marveling: How did she get to be this cool?

She was independent, forthright, and sassy. She let you know what she wanted and when she wanted it.

Once, she drove Guion and I back to Ohio, and she let us know as soon as we got in her car: “Listen, I love you two, but we can’t talk much on the drive, because the race is on.” NASCAR or maybe the Indy 500, I don’t remember, but she loved her racing. She switched on the radio and that’s what we listened to until it was over. And then we talked about her family, how much she fought with her sister and her judgmental Dutch Reformed family, and about Michigan life.

When this photo above was taken, we were on a family holiday in the Outer Banks. She adored the ocean and couldn’t get enough of it. Kelsey and I were sitting out on the deck with her, and she was flipping through some magazines. Alex had made the three of us (very) salty margaritas, and we were laughing and talking while we drank them and looked out at the ocean. Kelsey and I decided to paint our toenails, and she watched us and chatted.

Later, after we got inside, Kelsey and I looked at our nails, and they looked terrible: all clumpy and gross. We exclaimed that they turned out horribly, and Gran looked at us and said, very matter-of-factly, “Oh, yes, you’re not supposed to paint your nails in the sun. The hot sun will ruin them as they dry.” She started laughing. We demanded to know why she hadn’t stopped us from painting them. And she said, with a face full of mischief, “I just wanted to see what would happen.”

Two nights ago, I had a dream about Gran and my mom’s mom (Lucy, aka Ma-Maw). Lucy and Loretta have been dear friends ever since they were brought together by my parents’ marriage. As you can see from the photo above, they had a great deal of fondness for each other.

In my dream, Lucy and Loretta got a townhouse together in a retirement community. It was the present day, but Gran could speak and move around on her own, and somehow, them moving in together made them younger. They were having the best time as roommates, and they just wanted to party all the time. We kept asking to come visit, and they kept saying, Oh, we’re too busy, not this week, maybe next. But we all knew they were just partying hard and wanted to be independent ladies.

The dream made me laugh a little when I woke up, but when I recounted it to Guion, I couldn’t retell it without crying.

Gran, love you forever and always. What a gift it was, to know you. 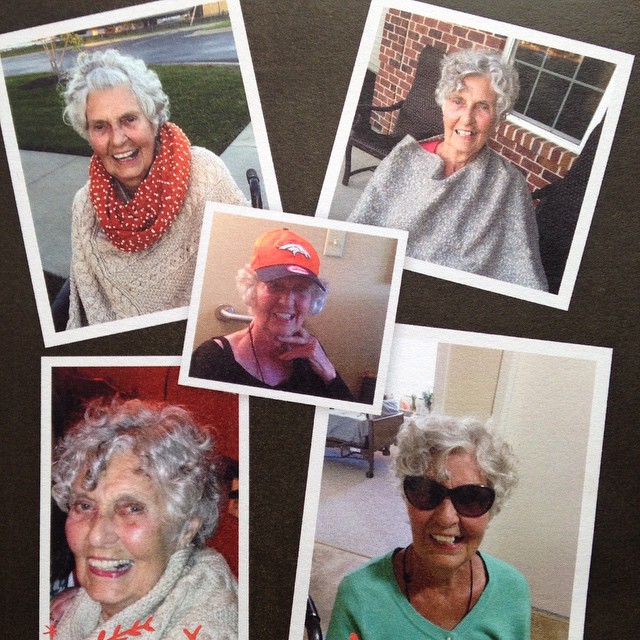