Since finishing Rebecca Solnit’s lovely book Wanderlust: A History of Walking, I have continued to reflect on the pleasures of a good, long walk.

Specifically, I feel breathless when I consider the large number of barriers that still exist to women who dare to walk alone.

(1) In history, any woman who was on the street alone was a prostitute (a street-walker). Even today, any woman who exists on a street unaccompanied by a man could be accused or suspected of prostitution. In some countries ruled by fundamentalist religion, it is still unlawful for a woman to exist in public without being accompanied by a man. (I recall Malala Yousafzai laughing about the absurdity of this rule in her memoir; by law, she had to be accompanied by a man on her errands in her Afghan village. But that “man” was her 4-year-old brother, who she was just baby-sitting on the way to the market. But by Taliban order, he fulfilled the law and was “protecting” her.)

(2) Furthermore, women are daily subjected to sexual harassment if they deign to exist on a public street alone. Regardless of attire, women come to expect some form of verbal or even physical harassment on the street. A woman alone on a street? Surely she deserves to be ridiculed and disgraced for her existence, for her outrageous boldness to possess a body! So men may yell at her, shout obscenities at her, do whatever possible to make her feel belittled, ashamed, and used.

(3) Women’s clothing has also been a barrier to free movement. And even though women no longer have to wear corsets and yards and yards of fabric to pass the muster of common decency, we are still hobbled by high heels and mini-skirts. Woolf puts the sartorial tension between the sexes perfectly in Orlando:

Thus, there is much to support the view that it is clothes that wear us and not we them; we may make them take the mould of arm or breast, but they mould our hearts, our brains, our tongues to their liking. So, having now worn skirts for a considerable time, a certain change was visible in Orlando, which is to be found even in her face. If we compare the picture of Orlando as a man with that of Orlando as a woman we shall see that though both are undoubtedly one and the same person, there are certain changes. The man has his hand free to seize his sword; the woman must use hers to keep the satins from slipping from her shoulders. The man looks the world full in the face, as if it were made for his uses and fashioned to his liking. The woman takes a sidelong glance at it, full of subtlety, even of suspicion. Had they both worn the same clothes, it is possible that their outlook might have been the same too.

(4) Accordingly, violence against women is commonplace, and so a woman alone is constantly thinking about being mugged, assaulted, or raped. And yet this threat of violence is also used to keep women continually living in a state of fear; to live under the constant reminder that you are never safe, you are never whole unless you have a male protector from male violence.

It is simple, societal examples like this — the mere consideration of something as mundane as walking — that makes me ASTOUNDED when people say that we have no need for feminism, that our feminist work here is done. Or when supposedly intelligent women eschew the term “feminist” as if it were an epithet; it really and truly blows my mind.

Solnit writes in Wanderlust that she had been followed by a man who was yelling vile sexual proposals to her. When she finally turned around and told him off, he was livid and told her she had no right to speak to him that way and threatened to kill her. She writes:

It was the most devastating discovery of my life that I had no real right to life, liberty, and pursuit of happiness out-of-doors, that the world was full of strangers who seemed to hate me and wish to harm me for no reason other than my gender, that sex so readily became violence, and that hardly anyone else considered it a public issue rather than a private problem. I was advised to stay indoors at night, to wear baggy clothes, to cover or cut my hair, to try to look like a man, to move someplace more expensive, to take taxis, to buy a car, to move in groups, to get a man to escort me—all modern versions of Greek walls and Assyrian veils, all asserting it was my responsibility to control my own and men’s behavior rather than society’s to ensure my freedom.

So, what is a modern woman to do if she wants to take a walk?

I have also found that having a pair of German shepherds is a benefit. For better or worse, I never feel my typical whispers of fear when I am walking solo if I have Pyrrha and Eden at my side. In general, people don’t try to eff with German shepherds. (Even though the worst my dogs would do to you is jump on you and maybe bark in your face.) But they are my constant walking companions. Scary or no, they improve my mental state. There is nothing quite so enjoyable as a good, long walk with a dog at one’s side.

My feminism posts always end with this note of grim reality, a recognition that women are still not free. It drags me down, but I am resolved to keep thinking and walking, regardless of cultural mores, and take the dogs with me. 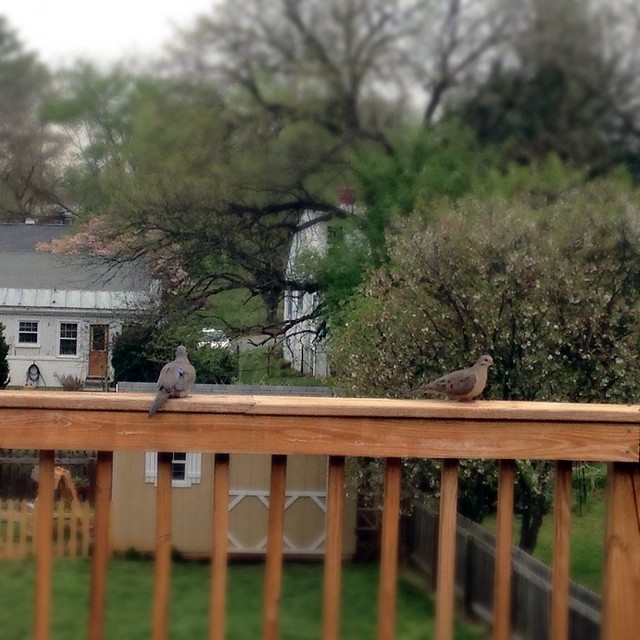 At lunch, I watched these mourning doves try to have sex. She rebuffed him after his failed attempt, and then they shuffled apart from each other and went back to preening themselves separately, not making eye contact. I imagine that she went back to her tree afterward, drank some white wine, and called up her girlfriends to say that she just didn’t think this relationship was going to work out.

I am reading a book about walking (Wanderlust, by Rebecca Solnit), and I’m really enjoying it. People laugh when I say this, but walking is one of my chief joys in life. It sounds funny because it sounds so mundane; it’s not like my chief joy is skydiving or horse wrangling. But there is no black mood that I can’t lift with a good, long walk. I crave a daily walk. My love of walking is also likely connected to my love of dogs and my love of solitary thinking; all three elements complement each other.

Things I could learn from Kelsey and Alex: 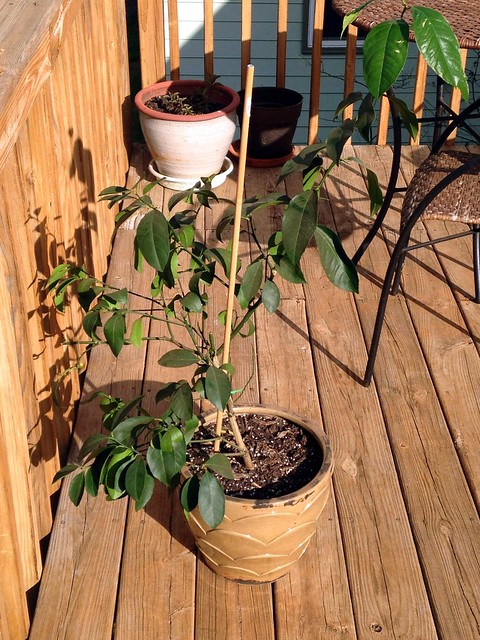 The lemon tree is getting rather ungainly. Here he is, sunbathing on the back deck. I got one fat, juicy lemon from him last year. I’m gunning for two this year. Dreaming big!

I also have a tendency to presume that all of my plants are male. I am not sure why.

I found an old diary from my senior year of high school. I wrote like I was living in a Jane Austen novel. And I, of course, was Elizabeth Bennet. And every boy was some Austenian archetype (there was a Mr. Bingley, Mr. Darcy, Mr. Wickham, Mr. Collins, etc.). It was very weird to re-read. I was surprised to read these dramatic scenes from my young life. I felt, at times, like I was reading a young adult novel about some other girl, some person entirely different from myself. I’d forgotten so many things that I barely believe they ever happened to me.